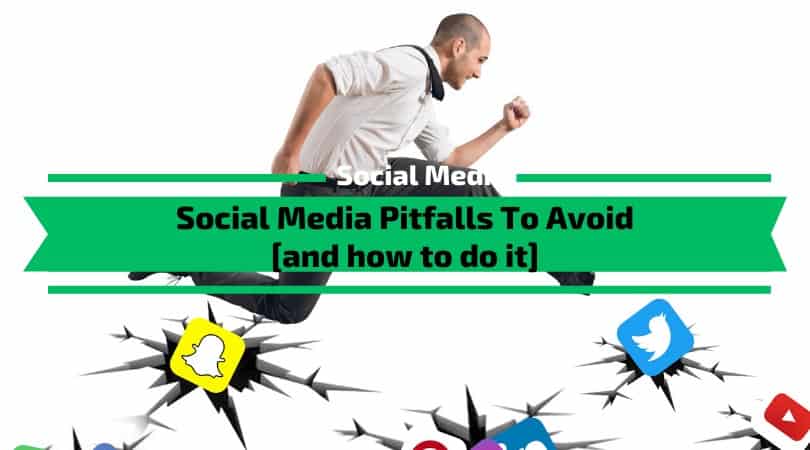 Social Media Pitfalls to Avoid and how to do it

It’s easy to create a Facebook, Instagram, or Twitter account, but it’s just as easy to have one that is completely ignored or – even worse – gets the exact wrong kind of attention. That’s why today we are going to talk about social media pitfalls and how to avoid them.

Sure you might have just started out wanting to share some of your opinions and photos with the world, but it’s important to acknowledge that with the right steps, you can definitely make some money out of it.

Whether by promoting your business, promoting yourself (and receiving sponsorships), or promoting others, you can achieve great success in the instantaneous world of social media advertising.

#1. Getting Into Legal Trouble

The most important thing to avoid is getting any sort of letter or email from a lawyer, as that can quickly shut down (or have you shut down) your pages and all your hard work has suddenly disappeared.

Even if you really didn’t do anything wrong, someone rustling up a lawsuit against you can still be bad news. If you want to fight the case somehow, it can be very helpful if you consider lawsuit loans.

These can help you pay for your own lawyer throughout the proceedings, and make sure you don’t have to give up all your hard work. At least not without a bit of negotiation or professional advice on how to move forward.

Yes, you read that right. Even though sometimes it feels like the internet is just one big trend machine, do not get hung up trying to make a comment or post on whatever is super popular at the moment.

First and foremost, you’re going to burn yourself out trying to stay on top of whatever is trending, but whatever you post – whether a comment, joke, photo or vid – is just going to get swallowed up along with everyone else who is using the same hashtag.

The much better step is to only occasionally use a trending hashtag. If you are an ‘everyday poster’, then maybe only a few times a week. That way you won’t feel the pressure, and it won’t seem like overkill if you do suddenly have a great brainstorm of what you want to share that you think is really unique.

Another advantage of not following trends is that you can then focus that much more on trying to do something original, and hey, maybe that will actually become a trend. And you’d always rather be a leader than a follower.

#3. Not Giving Due Credit

This is just a nice way of saying ‘don’t steal!’.

It’s easy to copy and paste another comment or photo, especially if it’s by another person who doesn’t nearly have as many friends or followers as you do but rest assured, you will almost certainly be found out. And while that is the most obvious and worst form of it, there are examples where it can get a lot more complicated.

Maybe if you are working a project with a few other people, and while it might be your idea, someone else worked a lot on the art, the writing, or the setup.

Even if you feel like you did the lion’s share of the work, make sure you give a shout-out to everyone. Not only will this build up plenty of goodwill among the team, but it will show that you can work well with people.

Trying to be a ‘social media island’, and claim that you do everything yourself will just isolate yourself in the worst possible way.

Of course, this one is easier said than done. And while sometimes when you are really excited, sad, or angry you might post something that’s from the heart and get a lot of positive feedback, chances are that you will instead say something (or share a photo of something) that is just going to blow up in your face very, very quickly.

For all the good social media can do, it can easily lead to some of the worst traits of people. There is already an army of anonymous trolls who pretty much exist to just aggravate and annoy, and if you’ve already been having a bad day, it’s easy to get in a pointless text war with these strangers, where there is absolutely no value in being right because they will never admit you are.

Sometimes it’s best to only interact with friends, but even then, it’s important to remember that tweeting and posting is not the same rich form of communication that face-to-face is (even if via a device).

Misinterpreting strictly written messages can easily flare up into an argument, so it’s important to give everyone a chance to explain themselves. Being patient and understanding doesn’t go hand in hand with being angry, so keeping that emotion away from your social media accounts can be very beneficial.

Even though this one is last, it is certainly not least. Nothing can derail a funny comment or a poignant line like a terrible spelling mistake. If you can catch it quickly, before anyone notices, great, but ideally you wouldn’t make one in the first place.

Spending just thirty seconds or so to run a spell-check – or simply read the post out loud – can save you plenty of embarrassment. If you want to be taken seriously as a social media influencer, then you have to take it seriously, and not writing ‘their’ when you mean ‘there’ is very important.