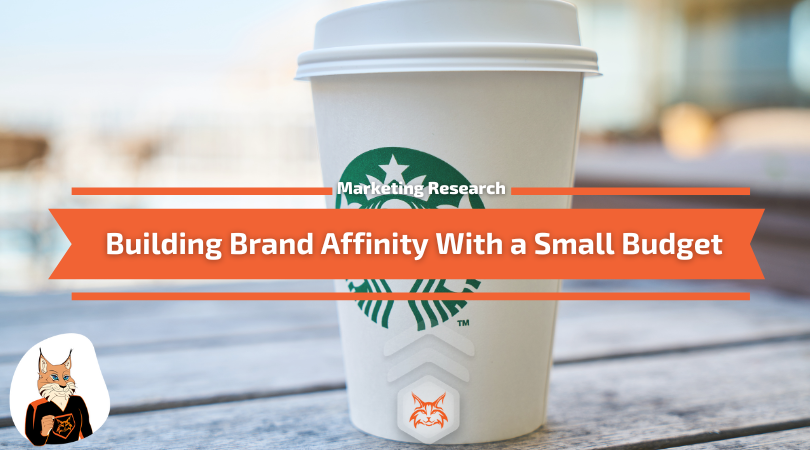 Brand affinity is the technical term for why you wouldn’t be caught dead drinking Coke if you’re a Pepsi fan. Or driving a Chevy when you have always bought Fords. Or buying an Android phone over an iPhone.

We tell ourselves it’s the taste. Or the performance. Or any number of logical-sounding reasons designed to make us feel like we’ve based our purchasing decisions on something very reasonable. But if we’re honest with ourselves, we have to admit that it’s our feelings about a brand that often make us choose one over another.

Brand affinity can be an important part of why your customers regularly choose you. But how do you build brand affinity without the budget of big brands like Apple, Ford, and Coke?

The Importance of Brand Affinity

What is brand affinity? It refers to a powerful connection that people feel to a brand. It comes from a sense that the brand shares certain core values that are important to the person. This connection often progresses from brand awareness that deepens into brand loyalty, and then finally into brand affinity.

Brand affinity is important because it dictates how people will behave. It influences which products they will buy when presented with choices. It also makes it more likely that people will act as ambassadors and tell others about a product without prompting.

The research is compelling. A study by predictive-intelligence company Motista studied 100,000 retail shoppers over two years. Among their findings, they saw that emotionally connected customers had a 306% higher lifetime value than those who were simply satisfied.

This may be due to the fact that these engaged customers stayed with a brand longer — on average 5.1 years versus 3.4 years. And they spent up to twice as much when they bought from their preferred retailer. Motista also found that customers who reported an emotional connection with a brand recommended those brands at a higher rate than those who rated themselves as simply “satisfied” (71% vs. 45%).

But for most brands, emotionally connecting with customers is not easy.

Coke, Ford, and Apple all have years of history and millions of dollars at their disposal to help build brand affinity. But what can you do to build brand affinity if you’re a small business or just getting started? Let’s look at four key areas where you can level the playing field without a big budget.

1. Find a niche the big brands have neglected

It’s not uncommon for big brands to lose touch with segments of their target audiences. This may be an opportunity for you.

Benji Wagner, co-founder and creative director of Poler Outdoor Stuff, spotted an opportunity to serve outdoor clothing enthusiasts who were unlikely to visit the remote locales promoted by Patagonia and The North Face. “The industry went down the rabbit hole in terms of creating more and more technical products for a consumer that’s essentially a weekend warrior,” Wagner said. “Poler makes a great jacket, but we’re not going to pretend you’re gonna climb Mount Everest in it.”

The copy and photography on the brand’s website appeal to the casual camper, whose concerns differ from those of hard-core outdoor athletes. Note the copy for one of Poler’s tents, which refers to camping as a family and to ease of setup, two concerns that resonate with the company’s audience. 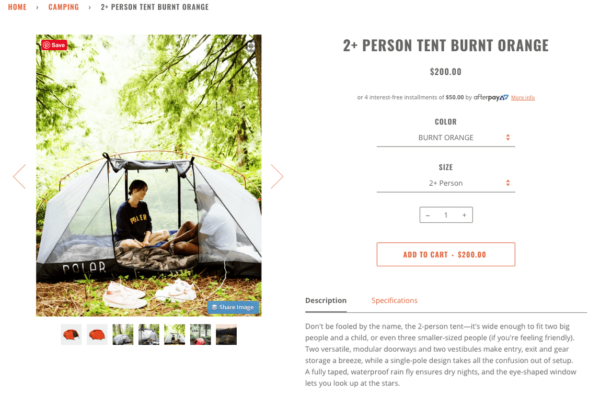 This focus on a niche audience that no one else is serving is one way to achieve brand affinity and connect with a segment of consumers more deeply.

Poler launched in 2011 and has enjoyed double-digit growth every year. The brand has 397,000 followers on Instagram, and its products are carried in over 500 stores in 30 countries, right next to the big brands in its industry.

2. Serve your customers better than anyone else

Customers can’t resist brands that serve them well. Especially when they’ve felt unheard for some time.

Captain Train was a French startup that sold train tickets online. The key in their success was obsessing over customer experience. According to Jonathan Lefèvre, head of the customer experience at Captain Train from 2012 to 2016, response speed was critical in an industry that was slow and extremely complex. He said their success could be summarized in one sentence: “Our customers are happy when we answer quickly.”

Captain Train focused on speed by making response time their key metric. “Speed became so important that the median response time became the one and only indicator to measure our ‘performance’ in customer support,” Lefèvre said.

While speed was no doubt important, people also appreciated the company’s down-to-earth communications. The brand served customers as if they were friends. This evolved naturally from the beginning when the company was actually serving friends, Lefèvre said.

People came to love the brand so much that the company regularly received fan mail. 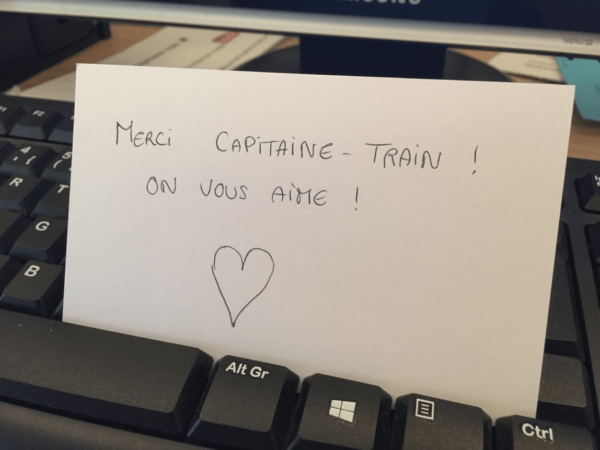 As Lefèvre said, taking good care of your customers can give back a hundred times over.

Tap into an authentic brand voice by being yourself. When you’re small, you have more flexibility than big-name brands.

AdaFruit Industries gained a following by making DIY electronics fun with its kits and learning videos. The company was started in 2005 by Limor Fried when she was still a student at MIT. Hackernoon says, “Fried merchandised the same building blocks found at electronics stores but also crafted quirky content that made the prospect of soldering a replica Space Invaders cabinet seem reasonable.”

According to the article, Fried’s company employs 85 people and earns $33 million per year. Despite the success, she has stayed hands-on with creating content and engineering products. She manages this by shooting videos off the cuff, not worrying about editing or polishing material. “Oftentimes, I will do a video just as I’m wrapping up work on something I was doing anyway. Or I might design a PCB live, on-air,” she says.

It must be working. The company has 324,000 subscribers on YouTube. 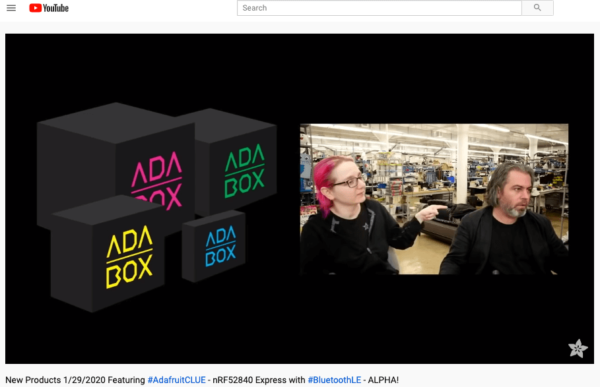 Keeping her personal style involved could be key to the company’s continued success.

Brooke Hammerling, a seasoned PR adviser to startups, says that no matter the stage of your company, “When a founder decides to take a backseat, and put a marketing person out there, it negatively impacts the team, the organization, and the trust reporters have in them. The press really wants that connection with the founder and their story.”

4. Gain a foothold among influencers

Influencers can amp up your credibility pretty quickly.

By aligning yourself with well-known figures, you can piggyback off the affinity your customers already feel for those people. And influencers don’t have to be celebrities in the traditional sense, either. Every industry has its micro-influencers.

For Square, appealing to influencers provided the initial traction the company needed. According to First Round Review, Square’s marketing team targeted tech- and social-media-savvy shop owners in the Bay Area, and these early customers helped them spread the word. “Because Square’s roots are in tech and the Bay Area, it initially started out marketing its card reader to local merchants and people who would immediately understand the technology.

Not only was the barrier to entry lower in this region, but the customers they landed were also fairly influential (and social media savvy), helping to spread product awareness to others.”

Keep in mind that influencers aren’t limited to people, either. Small businesses can search out and partner with other brands that align with their mission. For Square, this included a partnership with Starbucks in 2012 that would bring millions of new customers.

Square reached a valuation of $3.25 billion dollars in just three years and has continued to lead its category.

How to Measure Brand Affinity

Brand affinity is difficult to measure, but you can track it systematically. First, identify the actions you would expect a highly engaged customer to take — a mention of your brand on social media, for example. Then, track those actions over time.

Motista, the company that studies emotional connection to brands, came up with its own measure of brand affinity: Emotional Connection Score (ECS). It uses survey results and big-data analytics to measure the percentage of customers who have reached an emotional connection with a brand.

But there are plenty of other metrics used to measure brand affinity. Try looking at any of the following metrics:

Regularly calculating customer lifetime value can also show how your brand affinity is trending, because, as seen above, customer value increases as brand affinity increases. But likes and shares of your social posts may be misleading, according to Wistia, a video software company that helps brands build affinity.

It advises against looking at reactions to your social media posts as a measure of affinity for your brand because those actions reflect only a superficial appreciation of the post itself. Brand mentions on social media are a different game, though. When you see a trend toward positive sentiment, you’ll know brand affinity is growing.

However you choose to measure brand affinity, it will be worth building it into the key performance indicators (KPIs) you track regularly.

Start by Getting to Know Your Audience Better

If you’re looking to connect better with your audience and build brand affinity, one thing’s for certain: you can’t do it without knowing them.

So spend some time talking to people and reading comments online. Try to tease out the things that motivate them to buy or not buy from certain brands. In other words, conduct audience analysis.

Then, spend some time looking for niches in your industry. See if there are opportunities to serve customers better than your competitors — maybe you can wow with response speed as Captain Train did. Perhaps you can make a boring or technical topic fun, like AdaFruit did. Take a look around for influencers or partners you can align with.

And if it feels overwhelming, remember: the brands above started out small, too.

Need help with researching your market, understand your audience, and find potential partners? We can help you. check our Marketing & Strategy packages.

How to Craft an Effective Social Media Strategy

What Is SEM? A Guide to Paid Search Engine Marketing